Skip to NavigationSkip to MainSkip to Footer
Wireless Charging

Although it's existed as a smartphone charging technology for almost 10 years, many mainstream consumers know very little about wireless charging, or are completely unware of its existence. Today we are going to cover the wireless charging basics and help you understand a bit more about how the technology works and why it could be beneficial for you.

What is wireless charging?

As the name suggests, wireless charging refers to any method of providing power to a device which doesn't require a physical connection to be made between the charger and the device being charged. Wireless charging can typically replace cables, docks, or other types of connectors for charging personal electronics.

Is wireless charging a new concept?

Wireless charging first emerged in personal electronics in 2012, with some smartphone manufacturers such as Nokia and Samsung leading the implementation of the technology in their early smartphones. However it took a number of years for an industry standard to emerge, after which confidence increased among manufacturers and implementation became more widespread. Critical mass was arguably gained with Apple's inclusion of wireless charging in the iPhone 8 and iPhone 8 Plus in 2017.

How does wireless charging work?

Wireless charging uses electromagnetic induction to pass energy from a transmitter (charger) to a receiver (smartphone or other device) using copper coils. This concept is similar to the technology used in induction cooking stoves. The transmitting coil emits energy in the form of an alternating electromagnetic field. When the receiving coil is within this alternating electromagnetic field, movement is caused in the form of electromotive force, which is in turn converted into an electric current in the receiver coil and used to charge the battery. 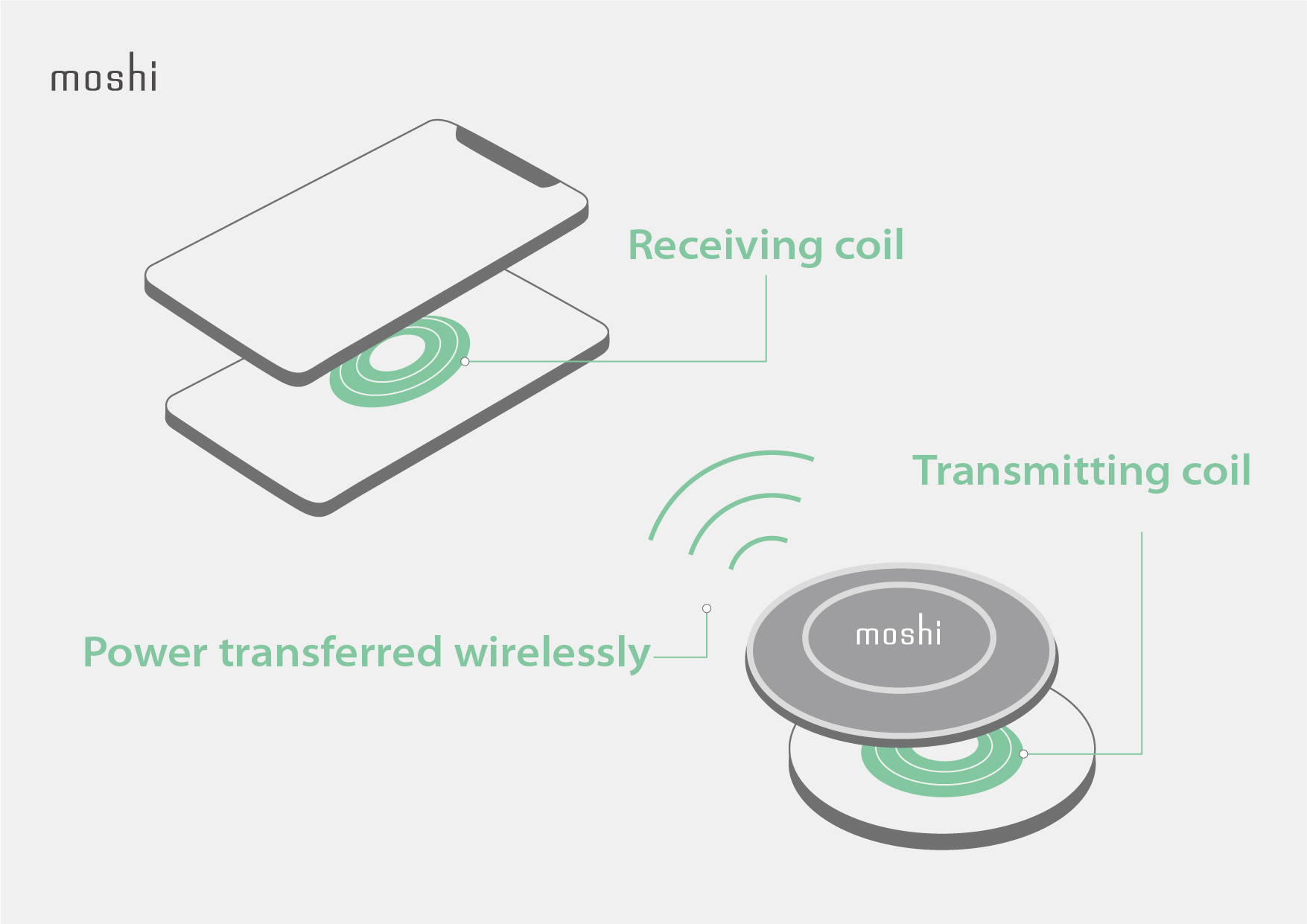 Qi (pronounced “chee”) is the de facto industry standard for wireless charging of portable electronics. Compatibility is guaranteed between Qi-certified products. The standard is overseen by the Wireless Power Consortium (WPC), a collaborative standards development group of more than 500 companies (including Moshi).

"Compatibility is guaranteed between Qi-certified products."

The Qi specification includes strict requirements on design and thermal regulation to prevent damage to devices while being charged. All Qi-certified devices dynamically adjust charging output to prevent excessive heat build-up and have built-in safety features to ensure charging current is only emitted when two compatible devices are placed nearby one another. Additionally, the electromagnetic field created by a wireless charger poses no danger to humans.